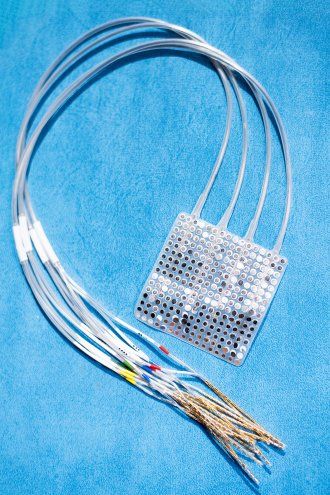 An ECoG array comprises a pad of electrodes that is surgically placed on the surface of the brain. Photo by Noah Berger

In a significant advance, researchers working toward a brain-controlled prosthetic limb at the UCSF Weill Institute for Neurosciences have shown that machine learning techniques helped a paralyzed individual learn to control a computer cursor using their brain activity without requiring extensive daily retraining, which has been a requirement of all past brain-computer interface (BCI) efforts.

“The BCI field has made great progress in recent years, but because existing systems have had to be reset and recalibrated each day, they haven’t been able to tap into the brain’s natural learning processes. It’s like asking someone to learn to ride a bike over and over again from scratch," said study senior author Karunesh Ganguly, MD, PhD, an associate professor in the UC San Francisco Department of Neurology. “Adapting an artificial learning system to work smoothly with the brain’s sophisticated long-term learning schemas is something that’s never been shown before in a paralyzed person."

The achievement of “plug and play” performance demonstrates the value of so-called ECoG electrode arrays for BCI applications. An ECoG array comprises a pad of electrodes about the size of a Post-it note that is surgically placed on the surface of the brain. They allow long-term, stable recordings of neural activity and have been approved for seizure monitoring in epilepsy patients. In contrast, past BCI efforts have used “pin-cushion” style arrays of sharp electrodes that penetrate the brain tissue for more sensitive recordings but tend to shift or lose signal over time. In this case, the authors obtained investigational device approval for long-term chronic implantation of ECoG arrays in paralyzed subjects to test their safety and efficacy as long-term, stable BCI implants.

In their new paper, published Sept. 7 in Nature Biotechnology, Ganguly’s team documents the use of an ECoG electrode array in an individual with paralysis of all four limbs (tetraplegia). The participant is also enrolled in a clinical trial designed to test the use of ECoG arrays to allow paralyzed patients to control a prosthetic arm and hand, but in the new paper, the participant used the implant to control a computer cursor on a screen. 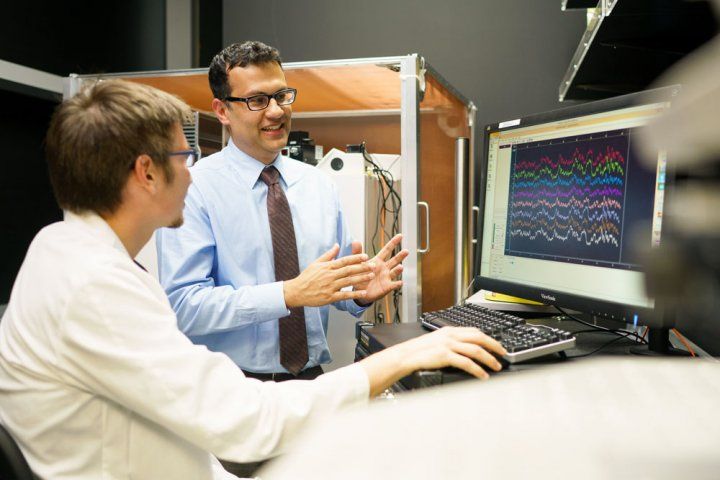 The researchers developed a BCI algorithm that uses machine learning to match brain activity recorded by the ECoG electrodes to the user’s desired cursor movements. Initially, the researchers followed the standard practice of resetting the algorithm each day. The participant would begin by imagining specific neck and wrist movements while watching the cursor move across the screen. Gradually the computer algorithm would update itself to match the cursor’s movements to the brain activity this generated, effective passing control of the cursor over to the user. However, starting this process over every day put a severe limit on the level of control that could be achieved. It could take hours to master control of the device, and some days the participant had to give up altogether.

The researchers then switched to allow the algorithm to continue updating to match the participant’s brain activity without resetting it each day. They found that the continued interplay between brain signals and the machine learning-enhanced algorithm resulted in continuous improvements in performance over many days. Initially there was a little lost ground to make up each day, but soon the participant was able to immediately achieve top level performance.

“We found that we could further improve learning by making sure that the algorithm wasn’t updating faster than the brain could follow — a rate of about once every 10 seconds,” said Ganguly, a practicing neurologist with UCSF Health and the San Francisco Veterans Administration Medical Center’s Neurology & Rehabilitation Service. “We see this as trying to build a partnership between two learning systems – brain and computer – that ultimately lets the artificial interface become an extension of the user, like their own hand or arm.”

Over time, the participant’s brain was able to amplify patterns of neural activity it could use to most effectively drive the artificial interface via the ECoG array, while eliminating less effective signals – a pruning process much like how the brain is thought to learn any complex task, the researcher say. They observed that the participant’s brain activity seemed to develop an ingrained and consistent mental “model” for controlling the BCI interface, something that had never occurred with daily resetting and recalibration. When the interface was reset after several weeks of continuous learning, the participant rapidly re-established the same patterns of neural activity for controlling the device – effectively retraining the algorithm to its former state.

“Once the user has established an enduring memory of the solution for controlling the interface, there’s no need for resetting,” Ganguly said. “The brain just rapidly convergences back to the same solution.”

Eventually, once expertise was established, the researchers showed they could turn off the algorithm’s need to update itself altogether, and the participant could simply begin using the interface each day without any need for retraining or recalibration. Performance did not decline over 44 days in the absence of retraining, and the participant could even go days without practicing and see little decline in performance. The establishment of stable expertise in one form of BCI control (moving the cursor) also allowed researchers to begin “stacking” additional learned skills — such as “clicking” a virtual button — without loss of performance.

Such immediate “plug and play” BCI performance has long been a goal in the field, but has been out of reach because the “pincushion-style” electrodes used by most researchers tend to move over time, changing the signals seen by each electrode. Also, because these electrodes penetrate brain tissue, the immune system tends to reject them, gradually impairing their signal. ECoG arrays are less sensitive than these traditional implants, but their long-term stability appears to compensate for this shortcoming. The stability of ECoG recordings may be even more important for long-term control of more complex robotic systems such as artificial limbs, a key goal of the next phase of Ganguly’s research.

“We’ve always been mindful of the need to design technology that doesn’t end up in a drawer, so to speak, but which will actually improve the day-to-day lives of paralyzed patients,” Ganguly said. “These data show that ECoG-based BCIs could be the foundation for such a technology."