UCSF researchers have discovered specific genetic mutations that can cause type 1 diabetes. This groundbreaking work could result in effective precision treatments for patients.

“So far, we’ve found mutations in 10 genes that clearly increase the risk of type 1 diabetes,” said UCSF endocrinologist Michael S. German, MD, who co-leads the research. “Our goal is to identify therapies that target the pathways in which these genetic mutations exist.”

Genetic link possible in 10% of people with type 1 diabetes

Type 1 diabetes is not typically considered to have a strong genetic link, but approximately 10% of people with the disease have a first-degree relative who also has it, according to German. “Type 1 diabetes caused by a single gene mutation may be more common than we had thought,” he said.

Over the past few years, German and his colleagues, including Mark S. Anderson, MD, PhD, Stephen Gitelman, MD, and Chester Chamberlain, PhD, have collected data on people with unusual presentations of type 1 diabetes or multiple family members with the disease and have sequenced their DNA, particularly the protein-coding genes. The researchers then looked for mutations unique to affected individuals and family members. The team studied whether the mutations affect how the gene’s protein product functions and whether that impacted either the beta cells or immune cells involved in the development of diabetes. The 10 gene mutations identified by the researchers each appears capable of causing type 1 diabetes and, in some cases, other autoimmune diseases as well.

The UCSF researchers found that these mutations can accelerate diabetes in some nonobese diabetic (NOD) mice. “It’s pretty clear that the genes we are identifying increase autoimmunity and the risk of type 1 diabetes,” German said.

As part of this work, the UCSF team partnered with University of Chicago researchers on a 2021 study involving a 24-year-old woman with type 1 diabetes and multiple other autoimmune and inflammatory conditions. The woman and her first-degree relatives underwent whole-exome sequencing, which identified a de novo mutation in the woman’s SKAP2 gene. Previous studies had established an association between SKAP2 and type 1 diabetes, but its effect on disease risk was unclear.

In studying this mutation, the researchers discovered it causes a gain of function that activates myeloid immune cells, leading to a break in immune tolerance and, ultimately, type 1 diabetes.

“This is a great example of collaboration,” German said. “A world expert on SKAP2, Clifford Lowell, is here at UCSF and worked with us on this study. Now that we have mice carrying this same mutation, his group is testing drugs that may block the activated pathway.” 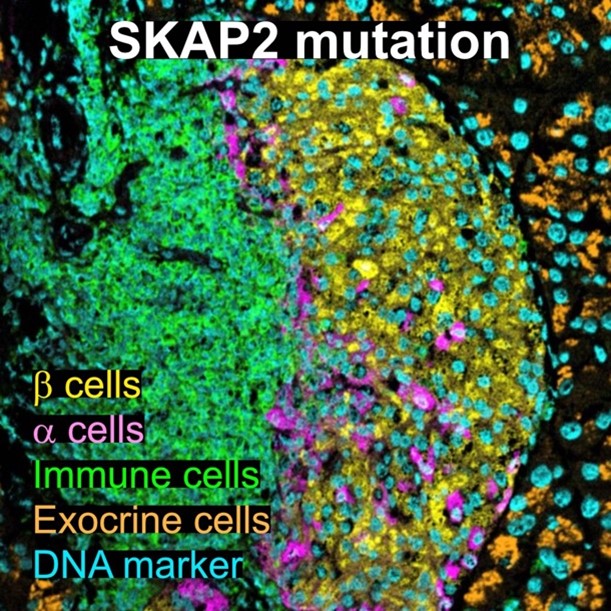 These research endeavors could soon lead to precision therapies that target specific pathways within the immune system as well as genetic testing to identify risk factors for type 1 diabetes and other autoimmune diseases.

Gitelman, who is involved in UCSF clinical trials aiming to alter the autoimmune response and thereby preserve beta cell function, pointed out that “a subset of people may respond well to a given therapy, but others may not respond at all. A better understanding of the genetics would let us target the most effective therapy to that individual or family.”

German hopes to expand the research. “We have about 1,200 samples at this point and are interested in finding more patients with these mutations,” he said. “Clinicians can contact us by email at diabetes.genetics@ucsf.edu if they have a patient or family that might be interested in joining this research.”

This work is supported by the Leona M. and Harry B. Helmsley Charitable Trust, the National Institutes of Health and a private donor.